The Dragon World Championships In Austria

On the 31st of August – 2nd September 2018 the Dragon World Championships, the world’s only team SUP racing event, arrived on the mystical mountain lined shores of Lake Fuschl, Austria.

36 teams representing 17 countries congregated at the event village Fuschlseebad to battle it out on their 22ft inflatable Dragon boards and claim the title of Dragon World Champion 2018.

Almost a year after the inaugural event held in Barbados, Austria brought with it a completely new set of challenges for competitors who were also competing against the changeable conditions and cooler temperatures. Last year’s winners, team Paddle Barbados, arrived in the driving rain with eager anticipation of the new terrain, defiant to defend their world SUP title. Yet, with so many new teams making their mark during a misty open practise session, it became clear there were some strong contenders – the Bajans would have to work hard to retain their trophy. 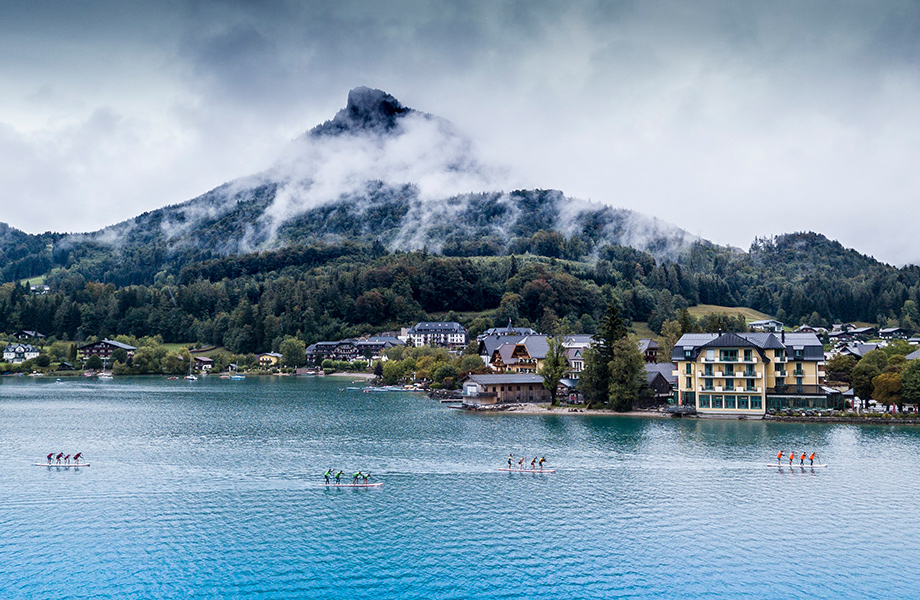 Friday saw the event village quickly come to life as teams from across the globe arrived in high spirits, eager to register and quite literally test the water. Headline partner Nike Swim were on hand to kit out each competitor ensuring they looked the part, while an open practise session gave the teams a chance to familiarise themselves with the course ahead of the first days racing. 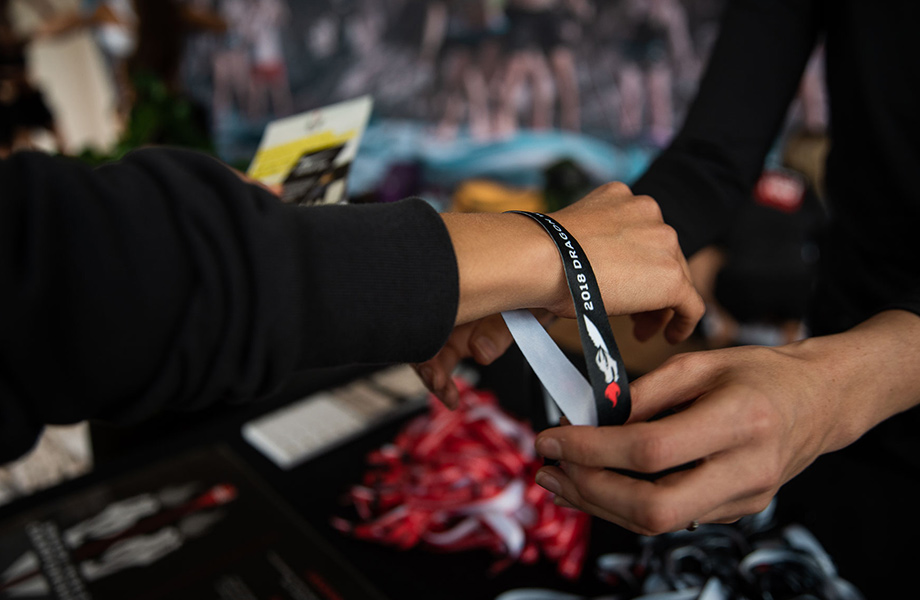 After a day of travelling, training and talking, the teams came together at the official opening ceremony hosted by Hotel Mohrenwirt. Located in the picturesque village of Fuschlsee, competitors were greeted to the sounds of a traditional Austrian zimmerman band and feasted on local specialities as the welcome drinks provided by Red Bull Austria flowed. The stage was set for an epic two days of non-stop, fun fuelled SUP racing.

An ominous scene greeted the competitors the following morning as a thick mist grappled at the steep alpine shores. Dark, rolling clouds and a light wind tugged at the moorings of the giant RED marker buoys, jeering the teams to take on the 850-meter square course. In stark contrast, the contestants arrived in high spirits, sharing stories, advice and laughter as the morning briefing got underway and individual team strips were revealed in the form of pink tutu’s, dragon onesies and everything in between! 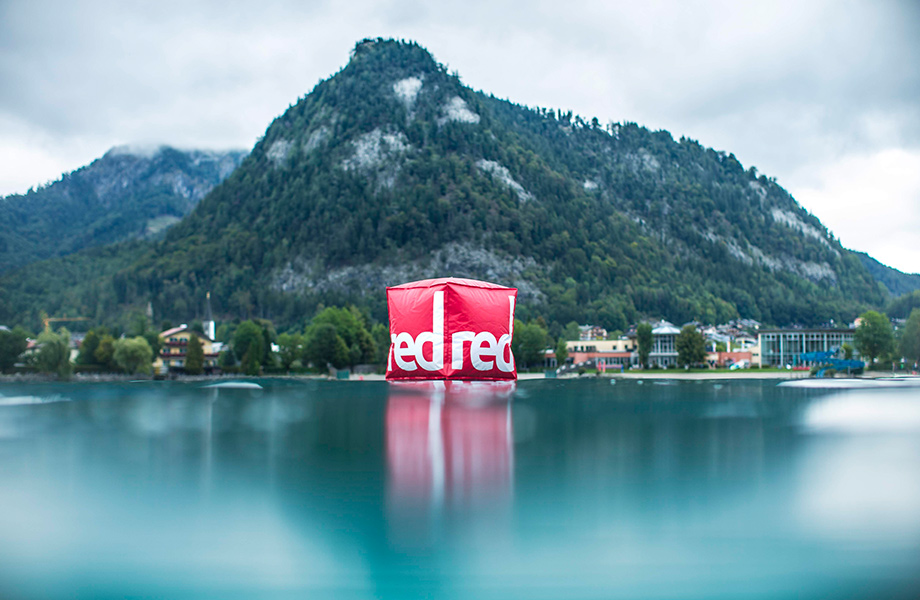 As the first races got underway, excitement grew as the eclectic tunes and commentary boomed across the water. Crowds cheered, and fellow competitors supported their opponents based on friendships forged the night before.

Round one saw family, ladies, mens, mixed and even some ‘first-timer’ teams go head-to-head in 6 board heats. This was their time to earn valuable rankings for round two and weigh up their fellow competition. 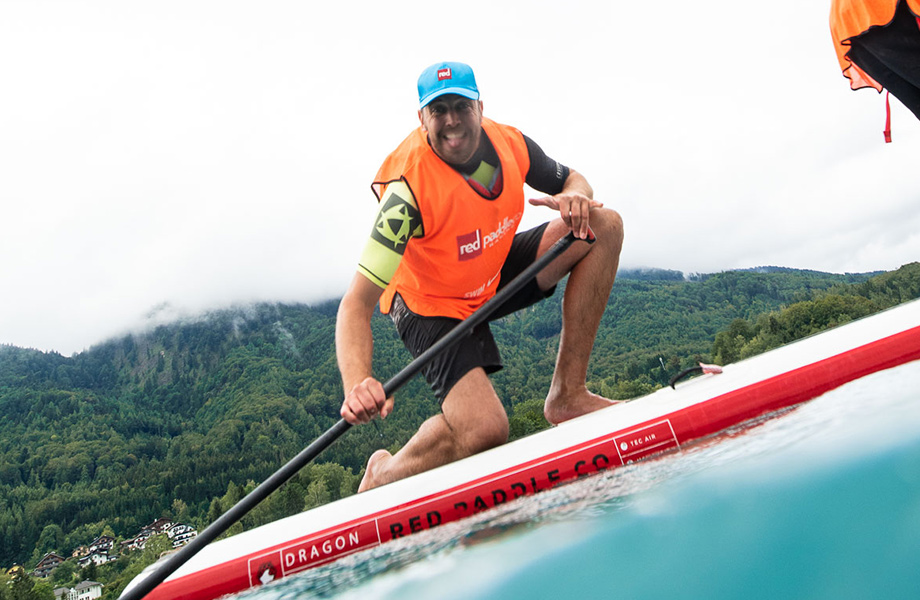 Chief event organiser, Sam Wonnacott said “It is great to see so many teams come together from around the globe to join forces here in this stunning location. This year, we have many individual entries with varying sup experience. It’s an incredible feeling to watch a team come together for the first time, find their rhythm and stride on the water and make new friends for life.”

As the dust began to settle after a full day of action, the reigning world champs proved their worth coming in a cool second, sandwiched between the two Hungarian teams – the Wog Boys (3rd) and SUP Race Team Hungary in 1st.  They had each earned key positions and promotion through to the early stages of round two. As the course lay dormant and the sounds from the day echoed and faded into the mountains it was all still very much to play for. 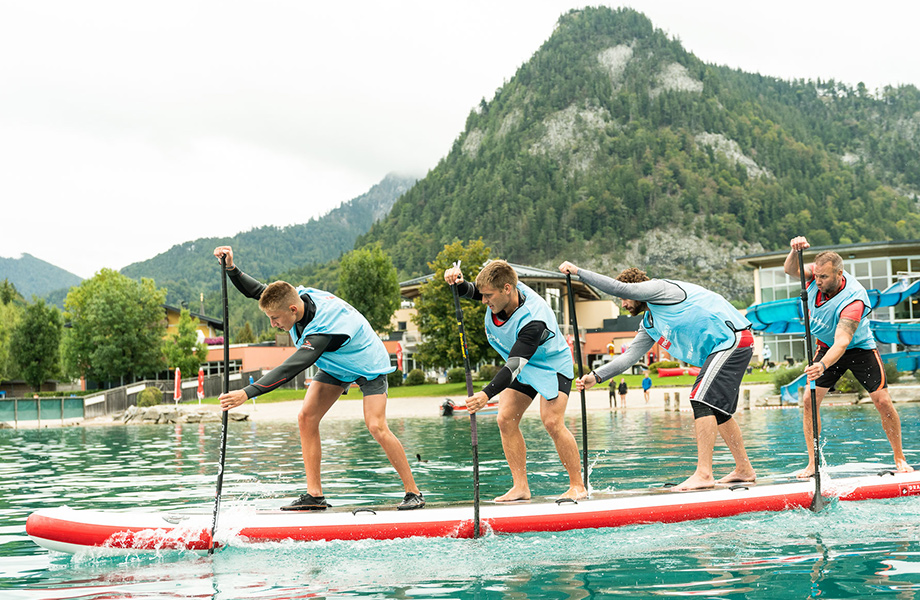 However, this is a story of two halves and as a spirited day of non-stop racing came to a close, a night of partying dawned. The Red Paddle Co team ramped up the good time vibes as the Red Bull poolside party got underway at the bustling Fuschlsee event site. DJ Richie Mack took to the decks as the Daffy’s Gin flowed. Brought together through their love of SUP,the international crowd showed their worth on the dancefloor and in the true spirit of the DWC, competitors become comrades – Dragon warriors by day and a global community by night.The atmosphere was electric as team Paddle Barbados took over the decks for the final set of the night. 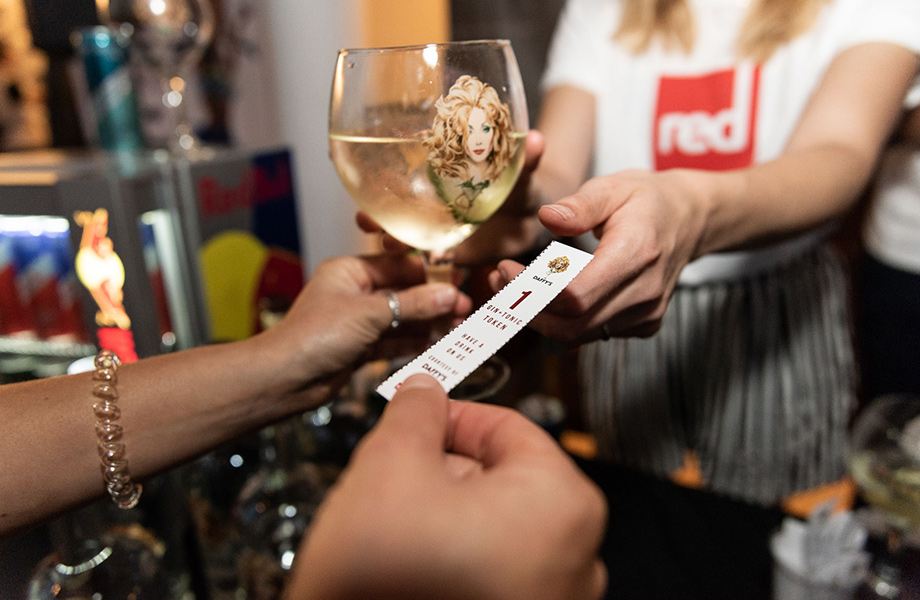 A bright, still morning greeted the paddlers on day two as the sun poked through the clouds and illuminated the mirror flat, turquoise waters of the lake. The worries from the day before long since forgotten, it was a last chance for some teams and for others it was their moment to be crowned the Dragon World Champions of 2018!

As the first heat exploded from the beach, it was clear to see the improvements from the day before as teams surged forwards, all four blades working in synch, powering their 22ft Red Dragon boards onwards, in hope of victory. 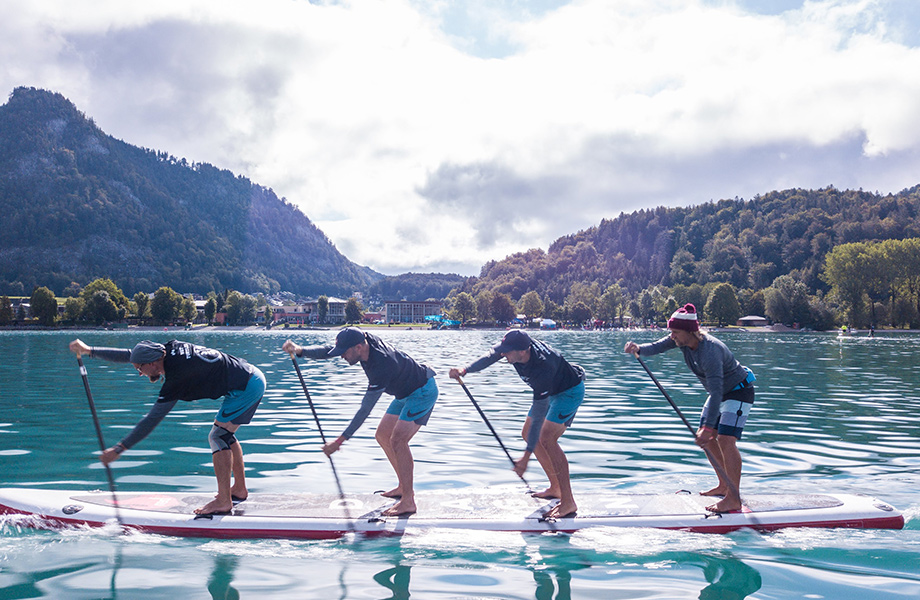 A stand out performance from ‘The Puffins’ had the crowd roaring from the shore as the family team, with a member as young as nine, advanced into the Quarter finals – a triumph in their own right.

Georgie Puffin explains, “I can’t believe there are many competitions in which families can enter in the same races as the elite teams – but somehow Red Paddle Co manage to blend both intense competition with inclusiveness and fun.
The experience for the kids is unbelievable – parenting as well as racing is brilliant, we have absolutely grown as a family and come together in our memories that we’ll keep forever.”

All was not over for teams who had been knocked out, as the mighty Gauntlet presented one last challenge and opportunity to reach the podium. The time trial challenge required teams to over-come four giant, floating obstacles, testing teamwork and camaraderie as much as strength and power. And with a separate prize purse at stake and the stress of the competition behind them, teams threw themselves at the task with renewed vigour. 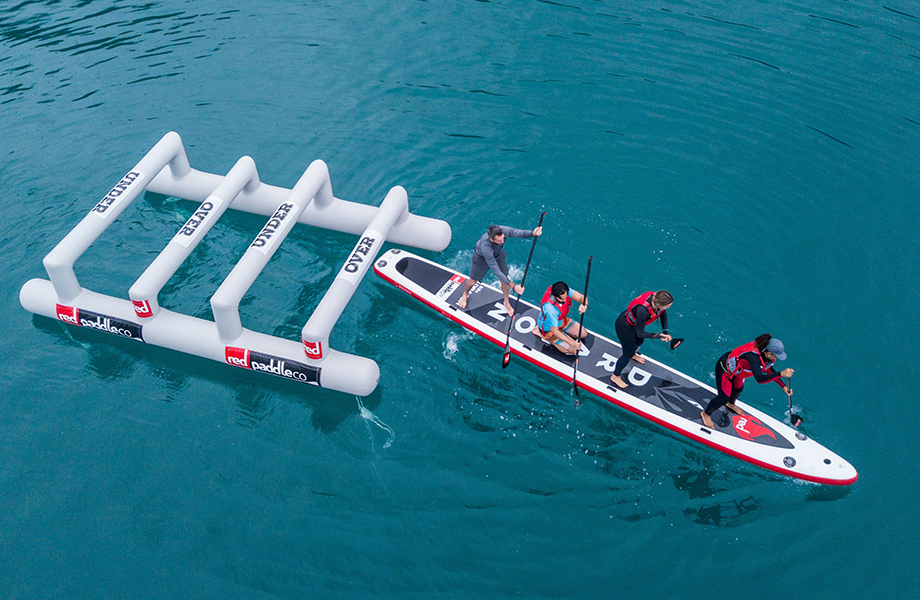 The semi-finals saw the course change for the remaining teams. Having raced a box course for the entire competition an additional mark was added less than a board length from the shore, requiring the teams to make a near-perfect 180 degree turn right in front of the crowd. It was a time for teams to keep their cool, apply their SUP skills and master the 22 ft Dragon.

This new, shallower hammer turn lengthened the course by almost 500 meters, asking even more of the competitors. Fighting against tired muscles to navigate the tight turn under the pressure of other teams and the proximity of the crowd, this new choke point in the race had teams rallying for position, before heading back out into the open waters once more.

The resilient all-female teams demonstrated their strength throughout the main competition, culminating in the ladies’ final.  After two days of racing in a mixed environment, it was clear there was to be no let up as the women attacked this last race with as much ferocity, as if it was their first. An agonisingly close finish saw the paddlers stream towards the finish line with the Dragon Angels laying down one massive effort to snatch the victory from the Flamingos with the BZH ladies coming in third. It was a final that set the tone for what was to come! 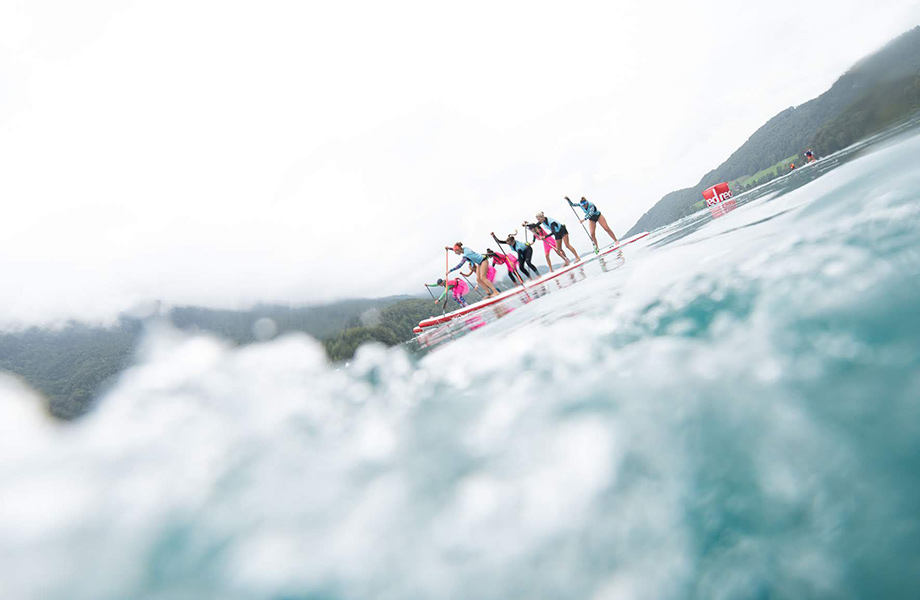 As the remaining six teams lined up for the last time, silence fell over the event site and the rumble of drums resonated to fill the void. Tension grew as all eyes were fixed on the teams lined up on the shoreline ready to be released. As the paddlers thundered from the beach it was SUP Race Team Hungary who showcased their superior speed and power by reaching the first mark with Paddle Barbados hot on their tail. Faces grim with determination and paddles tearing at the water, the teams powered their way around the inside mark and away for the final showdown. 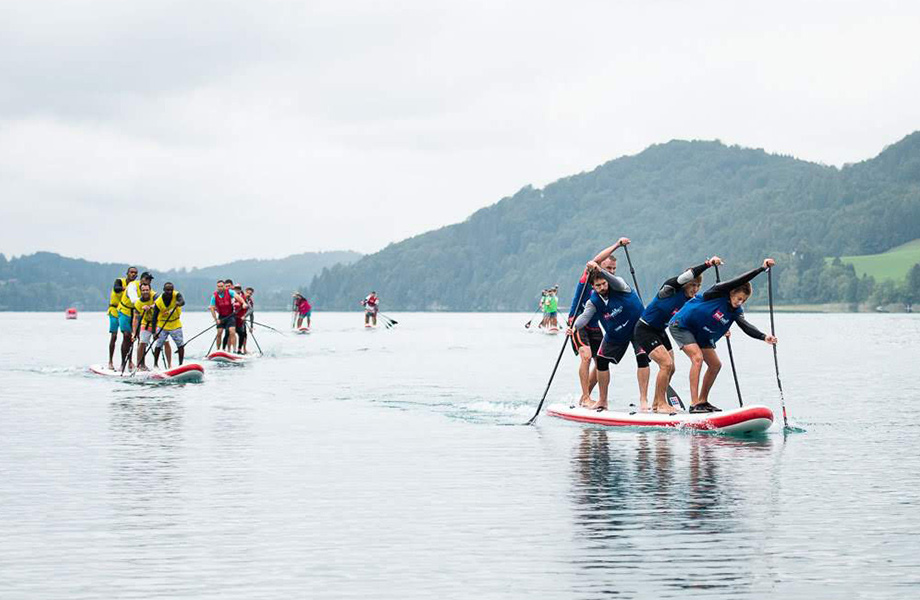 The cheers roared from the shore as SUP Race Team Hungary powered past the final mark continuing their dominance as they again stamped their authority on the fleet. Paddle Barbados proved their metal once more as they streaked in second, closely followed by the Wog Boys in third, Wet Turtles in Forth, Dragon Ane in fifth and Green bears in sixth – all welcomed across the line by cheers and admiration from the crowd. 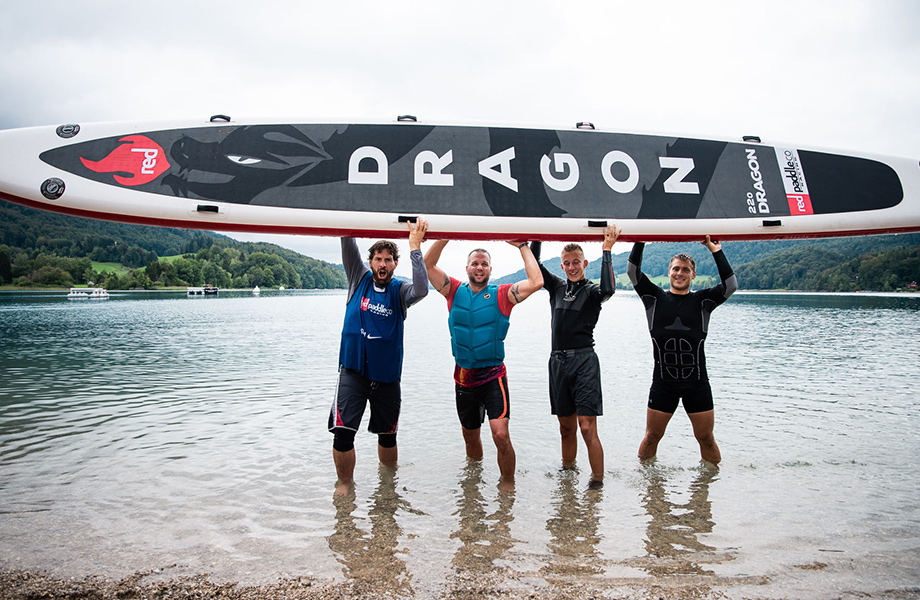 DWC will once again go down in history. This truly international event, brought together elite and novice paddlers in a unique and extraordinary way to celebrate the amazing sport of SUP. As the closing ceremony marked the end of the championships it was not just the victors who were celebrated but each and every participant. A special, Spirit of the Dragon award was presented to the Flamingos for encompassing what the Dragon World Championships is all about. 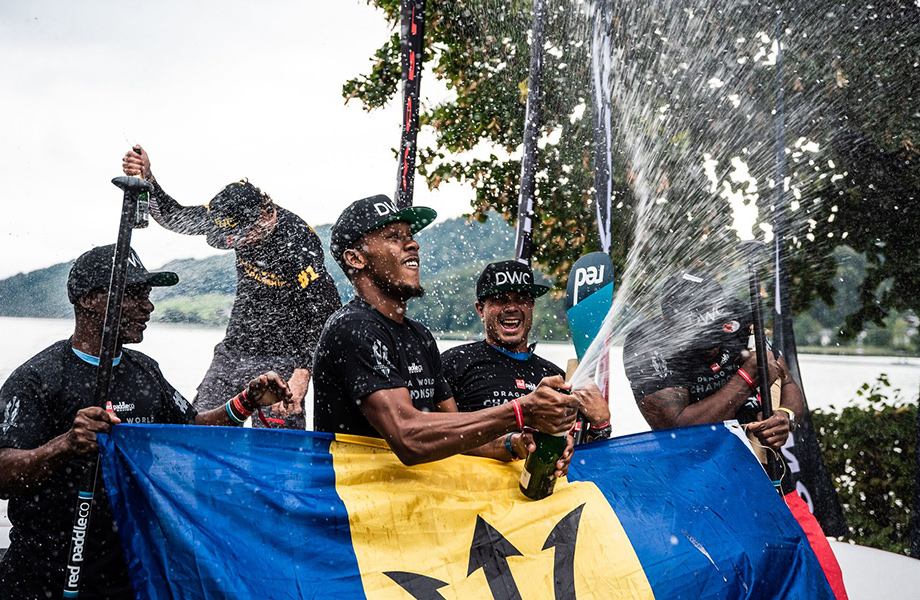 Friends were formed, memories were made, and the mighty dragon has its new masters – Team SUP Hungary will see you on the water. 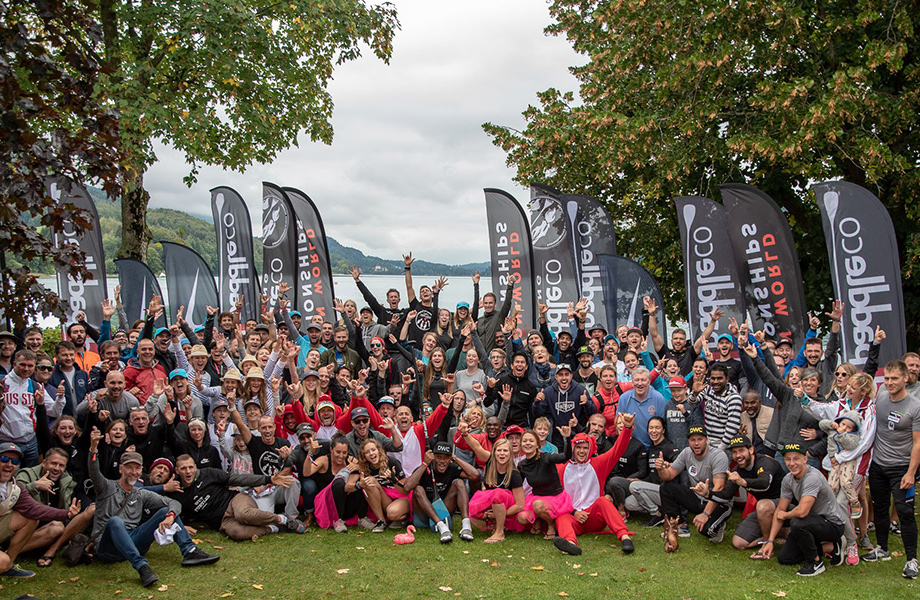