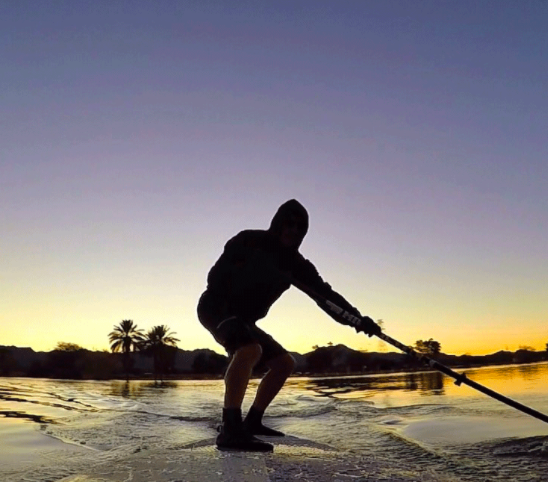 Arizona south of the Gila River, land that until 1854 was part of Mexico, land that can range from high Sonoran Desert and stands of the iconic saguaro cactus to mile-high grasslands that once were grazed and now raise grapes for wine, to the alpine “sky islands” of 9,000+ foot snow-capped mountain ranges.

My two “go to” lakes—Patagonia Lake and Pena Blanca Lake—are south of Tucson, deeper into Baja Arizona. Those lakes are not as big or dramatic as their cousins to the north (Saguaro Lake and Canyon Lake), but there’s something about them. Patagonia Lake is off state route 82 between Patagonia, population 913, and border town, Nogales. The 2-mile long lake, formed by the damning of Sonoita Creek, has a beach, shaded picnic tables, grass, and the feeling of ohana you get when you drive up the windward coast of Oahu to the North Shore and every beach is filled with families and it’s all about food, fun and being together. I mean, it is real! One time after I gave a group of young locals impromptu SUP lessons, they invited me, and a friend who had joined me for the drive, to join them in their pop-up tent for ice cold beer, barbecue, and fun conversations. They were from both sides of the border. They made us feel at home.

Patagonia Lake is a great paddle destination, even in the summer. When the temperatures in Tucson park north of 100, the temps will still be in the 90’s at Patagonia Lake, which is at 4,000’ elevation. I know, that still sounds hot, but with low humidity, a westerly breeze, and evaporative cooling—jump in and the dry heat will wick the water away—the lake is like an island where people go outside during the day in summer.

Patagonia Lake has restrooms, a marina with boat rentals, a store, and even cabins for overnight rentals.

Pena Blanca Lake, 11 miles west of I-19 on State Route 289 has no amenities, no running water, and no fee to use it. And it is beautiful. Tucked into the foothills of the Pajarito Mountains, it always seems to have a breeze dropping down from the mountains. There’s a trail on the west side of the lake with wide spots that families use to picnic and swim. It feels rustic and remote because it is. The road in curves and carves around grassland hills with stands of mesquite and rock outcroppings. Because it is surrounded by hills and cliffs, you look up, not out, at the sky and the clouds that blow in and by.

Drive down to boat ramp, off load boards and gear and park in the lot at the top of the hill. Both lakes are swimmable through October; both are paddleable year-round. Ice is not an issue.

At Patagonia Lake, the beach is the best place to launch. The shallow water off shore can be rocky in places. Reef boots are recommended though plenty of people paddle barefoot. At Pena Blanca, there is a boat ramp with a small dock. The submerged part of the ramp is not surprisingly slippery but usable with care. You can also launch from the aluminium dock next to the ramp.

Find Paddle Boarding Near Me