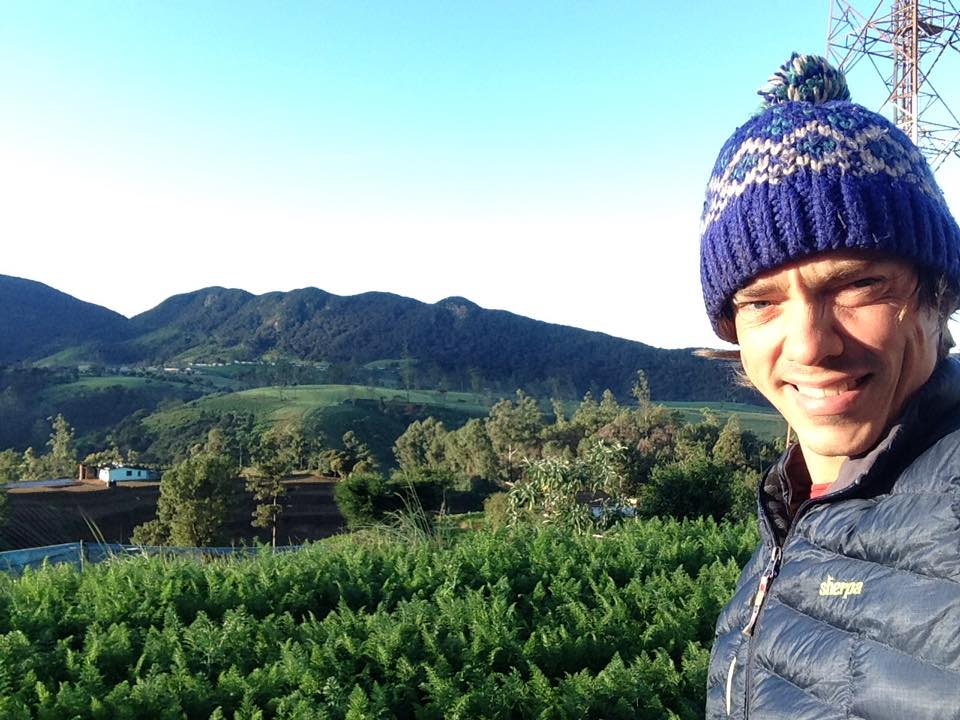 I’d barely been awake a few minutes when I received a text from Roy asking if I would like eggs on toast. I accepted the offer and it catapulted me out of my sleeping bag. I opened the tin shed door to a delightful landscape of rolling hills, some forest and some cultivated. It was still chilly enough to warrant hat and gloves, but would soon heat up. Roy brought out a fried egg, two pieces of buttered toast and a dollop of jam with a cup of tea. What a host for my first night.

I followed the track back down to the hut I passed the night before next to the Oya, ignoring the barking of the dogs this time. The same smiling old lady came out and signalled me to go back up the trail I came down yesterday. I tried telling her that I needed to follow the Oya. I walked along its bank for a few metres where they were growing crops. As soon as their crop patch ended, it became too steep and too dense to go any further. Once again, I needed to reevaluate. I looked up and saw a ridge line that seemed to follow the river. I climbed up, sweating and panting already. I reached the ridge line and it was a beautiful rolling meadow with the odd large tree dotted around. This walk would be an absolute joy. Ten minutes later I reached another jungle brick wall. 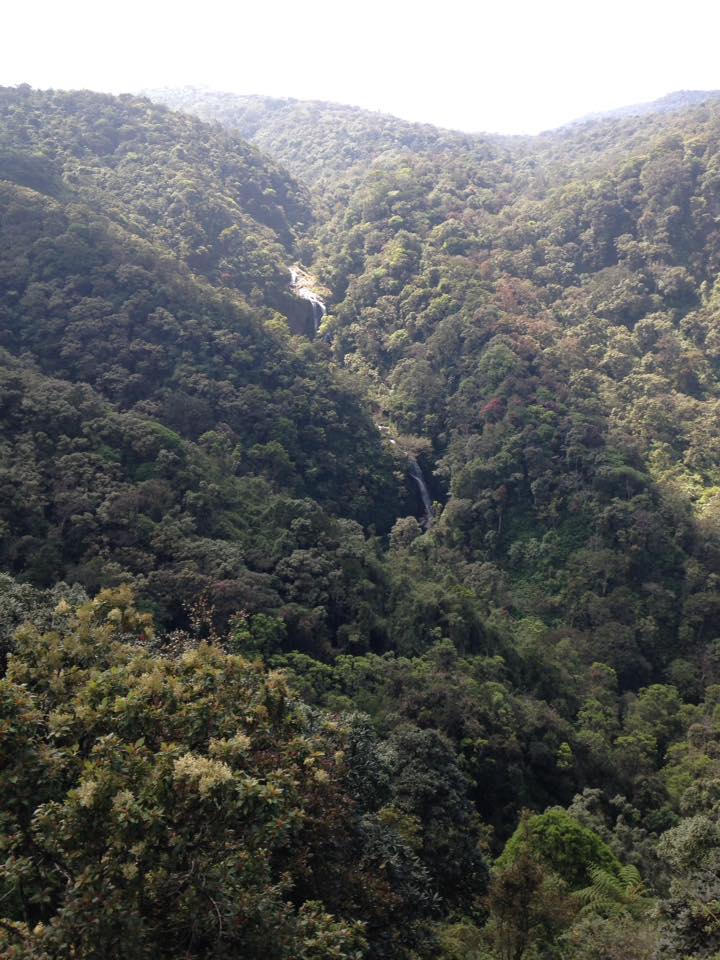 I looked around and the next ridge line was taking me too far away from the river, so I decided to crack out the machete. As soon as I was past the first line of bush, it became dangerously steep. I could weave and duck under some trees, others needed to be hacked. I slipped numerous times. My backpack regularly got stuck on low hanging branches. It was slow progress. I neared the bottom of the valley to find another swamp. This would take weeks. I double backed and climbed up to the meadow a sweaty mess. Another look at the map and I could see a large farm close by. The far end of the farm was only a few hundred metres from a large waterfall on the Oya, Elgin Fall. Surely it would be a clearer path there?

Through the meadow up to the road and I needed to climb a fence. It was two wires and I feared they may be electrified. I could hear no hum so I quickly touched the top wire and received no shock. As I went to climb over, my shin touched the bottom wire and I received the most powerful electric shock of my like. I jumped back screaming and swearing. Further along the fence, I found a big enough gap to crawl under, which I did so very tentatively.

A couple of km to the farm and some fantastic news from the security guard there, “you cannot pass into jungle from here”. No amount of map and photo showing was going to persuade him. Another dead end. “Go to train track” he said. I looked again at the map and, yes, the train track went within maybe 200 metres of Elgin Fall. Again I double backed, down to the Oya, past the old lady and her mouthy dogs and up to the train track. There was even a narrow dirt footpath alongside to follow. Within minutes I met many friendly railway workers conducting repairs and clearing bush. I walked along with one of them for the best part of an hour while he intermittently whacked various parts of the track with a sledgehammer. Just before Elgin Falls I discovered a terrace of small rooms, presumably for the workers. I found a tap and toilet out back, much to my convenience. 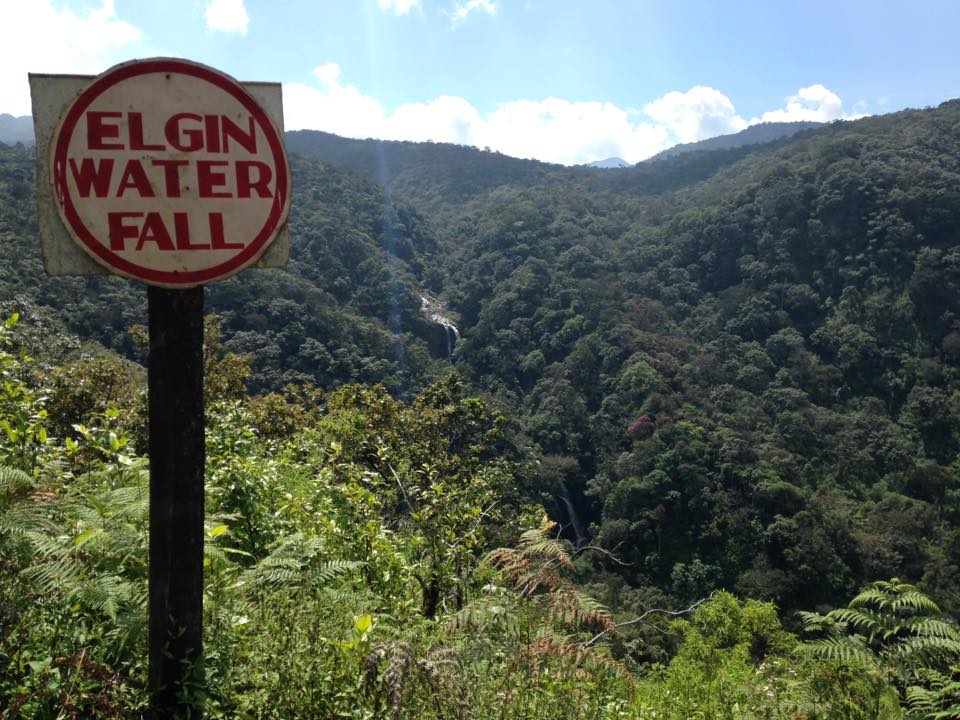 I set off again, ready to see Elgin Fall just around the corner. And I did, but not as expected, which is what I should have expected the way this day was going. It was maybe only two hundred metres away, but it was at least a hundred metres down through very dense jungle. It also looked incredibly steep. Once again I checked my map, the train track kept taking me further away from the Oya. This seemed the only way. I started hacking downwards with my machete and very slowly began descending into the jungle. I was mostly sliding on my bum due to the deep unsteady footing. Many of the branches I tried to stabilise myself on were rotten and crumbled away upon touch. For around twenty minutes I went down feeling extremely nervous, suddenly I could see into the distance, the trees had stopped. I was on the edge of a vertical drop, I knew it. Going on would have been suicide without a partner and a lot of rope. I turned and fought my way back through the trail I’d made.

I stumbled back onto railway track, threw my bag down and lay in the shade exhausted, scratched and bleeding. I caught my breath, hydrated and cooled down. I decided to continue along the railway track and take the first path back to the river I came across. The maps told me this would be roughly 15km extra onto my walk. Rather that than suicide jungle hacking. 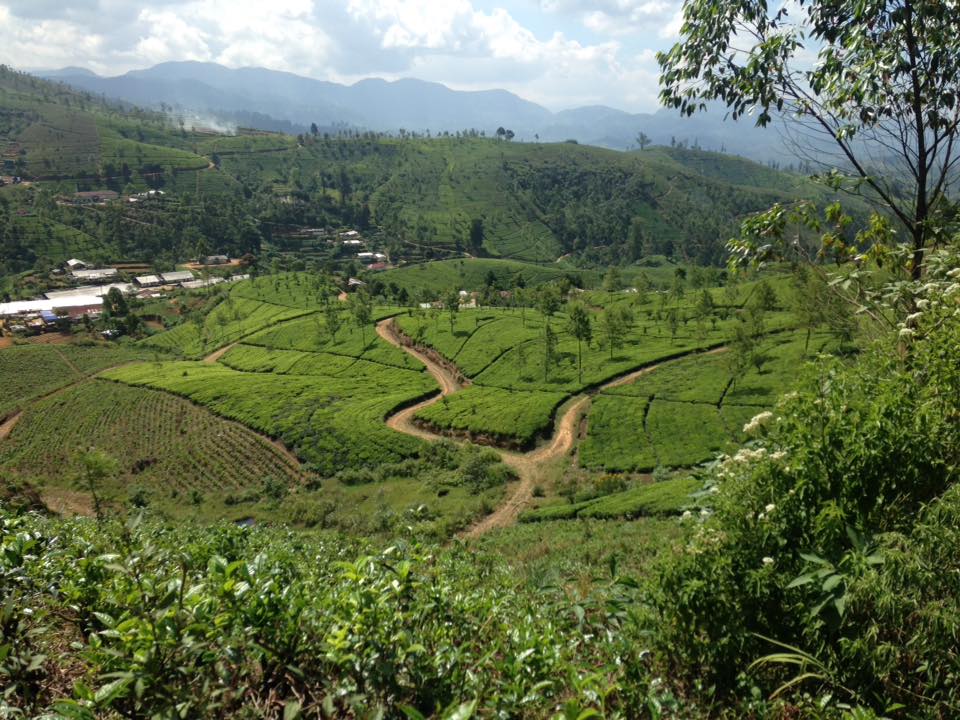 I began thoroughly enjoying walking along the railway. It seemed truly wild with deep jungle either side, but with an easy trail to walk along. The occasional train came past, sometimes a bit to closely. After around two hours I came to a clearing on my left. I looked down upon many beautiful tea plantations with zigzagging dirt tracks all over. I’d found my path back to the river.

I slowly descended, realising my legs were beginning to tire. I just wasn’t used to walking this distance let alone in these conditions. Down to the bottom of the hill and back up another. Two young lads joined me giggling. I told them where I needed to go, just picking the nearest place name next to the river. They walked along with me, occasionally taking me into a tea plantation shouting “short cut!”. I soon found it difficult to keep up with them as they floated along in their flip-flops. I was truly done for the day, but everywhere around me was tiny tea trees on steep hills.

All the ladies picking tea leaves would shout “Hello! How are you!” Followed by excited laughter. Finally the road came in sight and next to it, the river. I was so happy, hungry and thirsty. I sat on its bank and drank the two litres of water from my bag. I shook the two young lads’ hands thanking them for their guidance. They bounced off back in the direction we came from still full of energy. I wondered how far out of their way they came without want for anything. 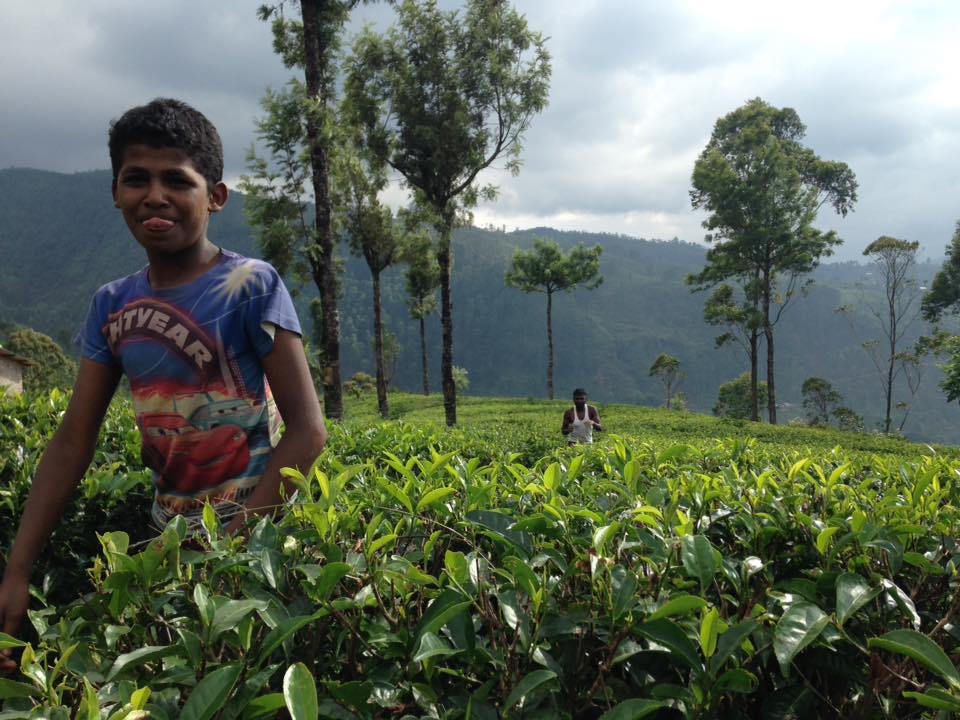 I followed the road for ten minutes until I found a small restaurant. For less than £2, I ate a mountain of Kottu (chopped up flat bread stir fried with veg and meat) and a glass bottle of coke. As I was leaving a man asked me where I was going, I told him I was on the look out for two trees to hang my hammock. He advised me to walk another kilometre down the road where the temple would give me shelter. The Father there was very welcoming but apologised that they had no beds, “Would you be ok with the floor?” He asked. Of course I would be, I was exhausted. I walked into the temple and immediately spotted two pillars the perfect width for a hammock. While a lovely elderly gentleman named Uncle made me the best cup of tea I’ve ever tasted, I strung it up. Everyone was amazed, I’m sure hammocks cannot be available in Sri Lanka because nobody seems to know what they are. After tea, I had a refreshing squat wash from a bowl in the garden, gladly accepted their offer of some vegetable soup and slid into my hammock falling deeply asleep.