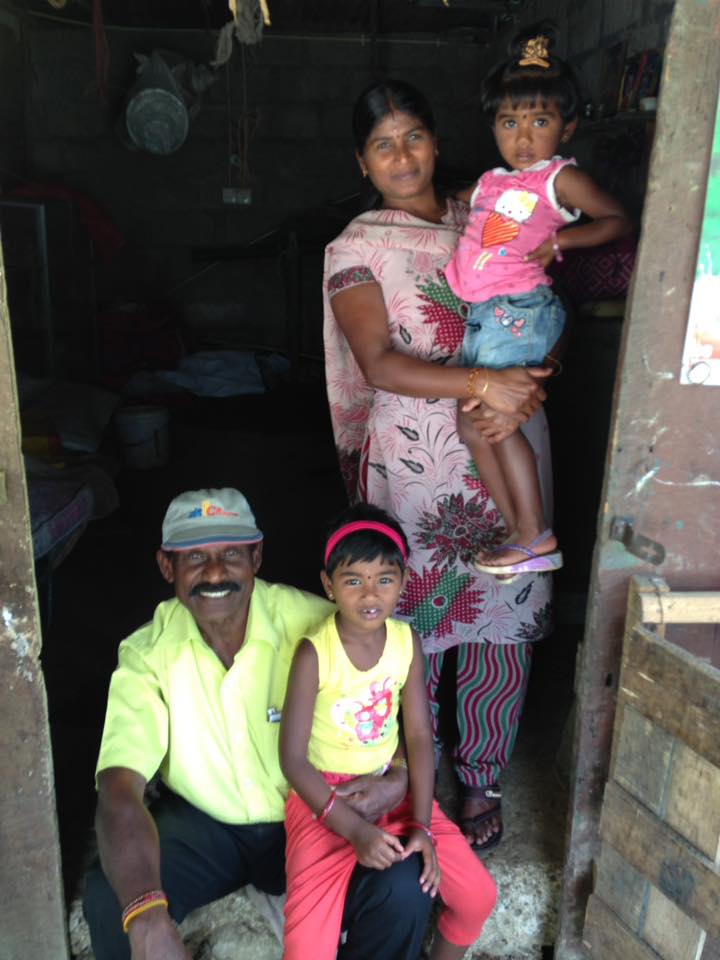 I was awoken by the grinning Uncle holding a cup of tea for me. I think my comment yesterday about his tea being the best I’ve ever tasted really touched him. I drank and packed up quickly, not wanting to overstay my welcome. As I was ready to leave, the Father told me breakfast was ready. What a lovely surprise. Uncle had made rotis, sambol and dahl. The rotis were so heavy I thought they’d last me all day, reminding me of Elven Lembas bread. I couldn’t refuse one more cup of tea and I hit the road.

It was another beautiful blue sky day, which I cherished, I knew a lot of rain was to come. As the road meandered along with the river, I passed through many tiny farming villages with the most friendly people. I completely lost count of the amount of time I was shouted ‘Good morning!’ Sometimes I couldn’t even see people amongst the tea trees until they began shouting, and I spotted many smiling faces. It was just like the morning scene from Bambi! Kids would begin chasing me shouting all the English words they knew, then stop and giggle when I turned around.

This continued for around three hours until I reached a large reservoir on my right and the next town, Talawakelle. Just the other side of the town was St Clair Falls. From what images I could see online, it looked stunning and easily accessible as it was surround by meadow-like grass. I planned to camp there this evening and follow the river there on.

I bought a few supplies from Talawakelle and walked along the road to catch a sight of the falls. I bumped into a tea plantation supervisor who spoke some
English. I told him what I was planning and he laughed. This has been a common response so I wasn’t perturbed in any way. He advised me to go further down river and climb back up. Further along I walked until I had a clear view. I could taste the water now, I was gagging to jump in and cool off. 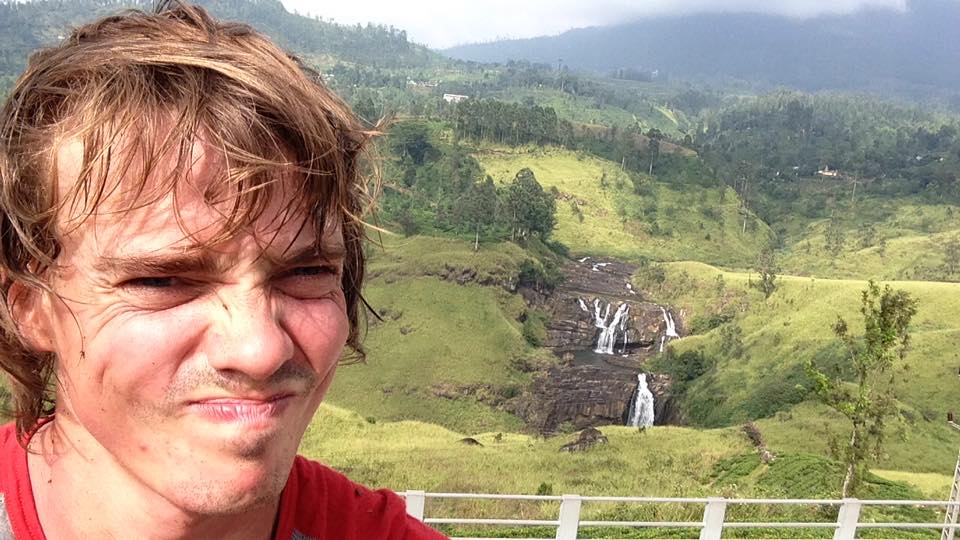 I picked a tea plantation to walk down until I reached the grass which would take me to the waterfall. It was not what I expected. 8ft tall thick, tough reeds. I tried walking through it but, just like yesterday’s jungle, it was a brick wall. I felt determined. It was maybe 500-800m to the waterfall. Two hours of hacking maybe? I pulled out my machete and began breaking a trail. With my huge blade I felt bad-ass until I swung with all my might and the blade of grass that had my name on it bent in half and laughed at me. As soon as I stepped onto the reeds I realised the ground was boggy. I would take a few steps on folded down reeds then my feet would fall through two feet and I would stumble over. My leg would then emerge with ticks and red millepedes on board. I was about to admit defeat for the second time in as many days. Once again I climbed out of the jungle after only making it a few metres sweaty and bleeding. I didn’t have the tools, knowledge, experience or skill to be dealing with this kind of terrain.

I climbed back up to the road, my right leg covered in blood and my top soaked through with sweat. A group of German tourists in a camper van were stood around looking at the waterfall as I reached the top. They all stared at me frowning “Don’t try and get down to the waterfall” I said. A couple laughed but the rest just carried on frowning in silence. I sat on the wall feeling very dejected for a while. I could no longer follow the river back to my board, I would have to take a completely different route along the road. I gathered my senses and tried to make the best of the situation.

On the map I could see another waterfall, Devon Falls only 4km along the road. Maybe I would get my waterside camp spot this evening after all? I now felt completely positive about my new adventure. Many people offered me lifts to wherever I was going and couldn’t really understand that I actually wanted to walk. A few km down the main road my path took me onto a single track road leading down to Devon Falls. I was immediately greeted by two large Macaques sat on the side of the road palming rice into their faces.

Another fifteen minutes walk and I could hear the top of the falls. I wandered down a tiny road which I thought may have been someone’s driveway and found the river. A few steps closer and I could see where it fell off the edge 97m below. A few metres from the waters edge were two perfectly placed trees for my hammock, but it was obviously someone’s land. I didn’t want to miss this opportunity so I decided to knock on the door and ask for permission. Amidst more angry dogs which I once more ignored, the lady who answered said it was fine. 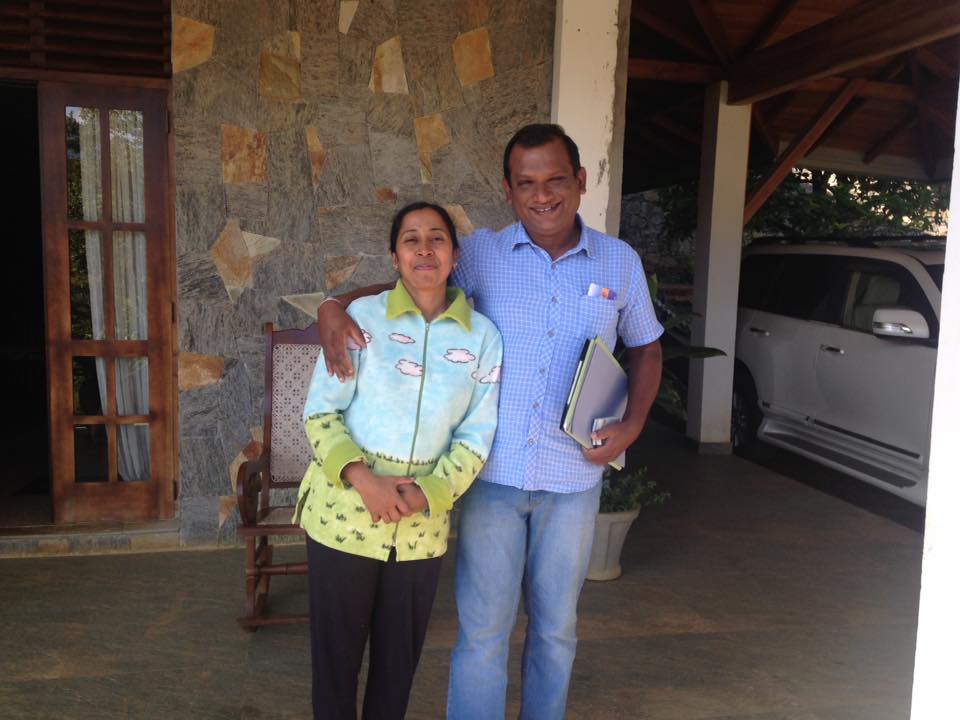 Halfway through setting up camp, the lady and her husband came over for a chat. They then invited me in for a cup of coffee and a shower. Sri Lankan hospitality was proving to be quite special. I finished my setup and wandered over to the large house. She gave me some flip flops and led me to the bathroom where I needed to scrub myself clean, especially all the dried blood on my right leg. I walked out feeling like a different man to find coffee and toast laid out on the table for me. Once I finished every scrap very quickly they invited me to come sit with them on rocking chairs out on the porch overlooking the falls. It was a beautiful evening and many small bats began circling around catching insects. Within minutes, the mosquitos suddenly became to aggressive to bear and we went inside.

As if they hadn’t done enough for me already, I was also given dinner of sausage, noodles and chicken while their Labrador, Zoe, stared at me hungrily. They even offered me a bed for the night but I was looking forward to waking up with a view from my hammock too much to accept. 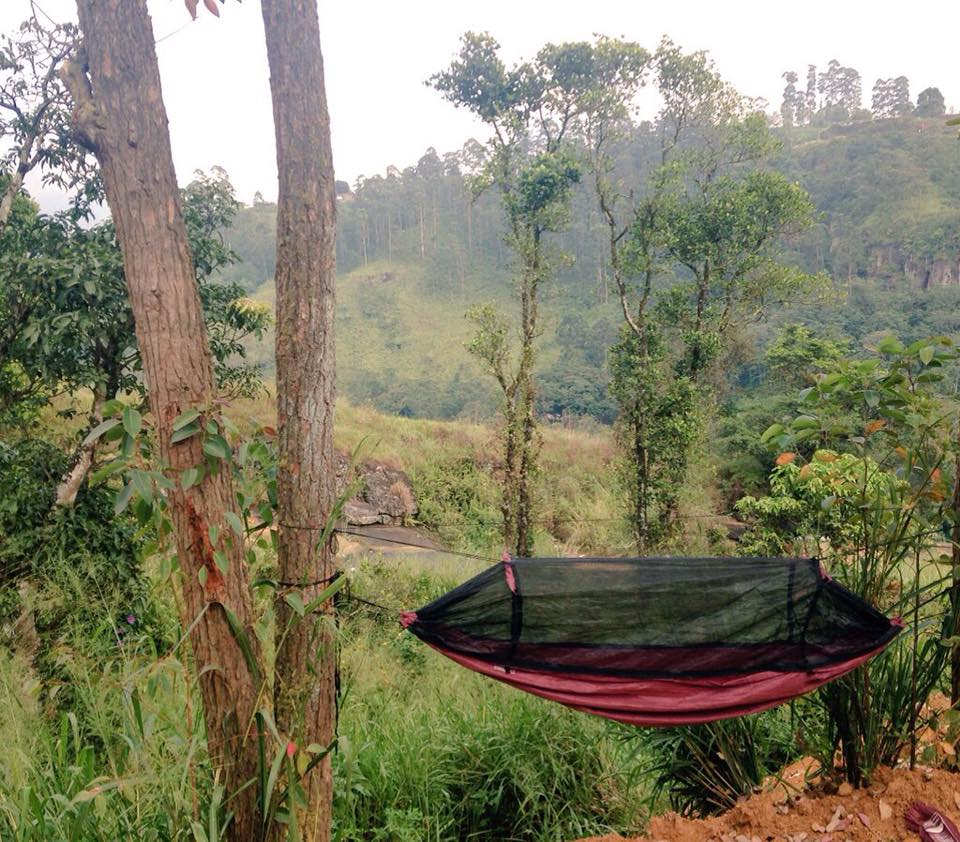 I thanked and bade them goodnight and walked back to my hammock. I quickly got inside and zipped up the mosquito net before I could be savaged again. It wasn’t long before my eyes fell heavy and I was drifting off, gently swaying, when I heard a faint whispering. Possibly someone saying ‘hey, hey’. I turned and saw the faint dark figure of a man about 20 metres away. He stood there for a few minutes and the walked away. It put me on edge and I struggled to get back to sleep. A short while later I heard a rustle and looked around to see the figure there again, this time with a cherry red glow of him smoking. I thought I could catch a whiff of weed and convinced myself it was just someone wanting to share a joint with someone and I soon fell asleep.